NASA’s Perseverance rover just went for its first drive on Mars, then spotted its own wheel tracks in the dirt

J. Jules Enterprise > Blog > Business > NASA’s Perseverance rover just went for its first drive on Mars, then spotted its own wheel tracks in the dirt

NASA’s Perseverance rover left its footprints on Mars on Thursday after going for its first drive. The jaunt proved the vehicle can make its way around the red planet.

Since Perseverance landed in Mars’ Jezero Crater on February 18, it has been calibrating its instruments and upgrading software. In this initial drive, Perseverance moved about 13 feet (4 meters) from its landing spot, made a 150-degree turn to the left, and backed up about 8 feet (2.5 meters) — a routine that it “executed perfectly,” according to NASA engineer Anais Zarifian.

As it drove, the rover’s navigation cameras snapped photos of its tracks in the dirt behind it.

“Our first drive went incredibly well,” Zarifian, who works on the rover’s mobility team, said in a press briefing on Friday. “I don’t think I’ve ever been happier to see wheel tracks, and I’ve seen a lot of them.” 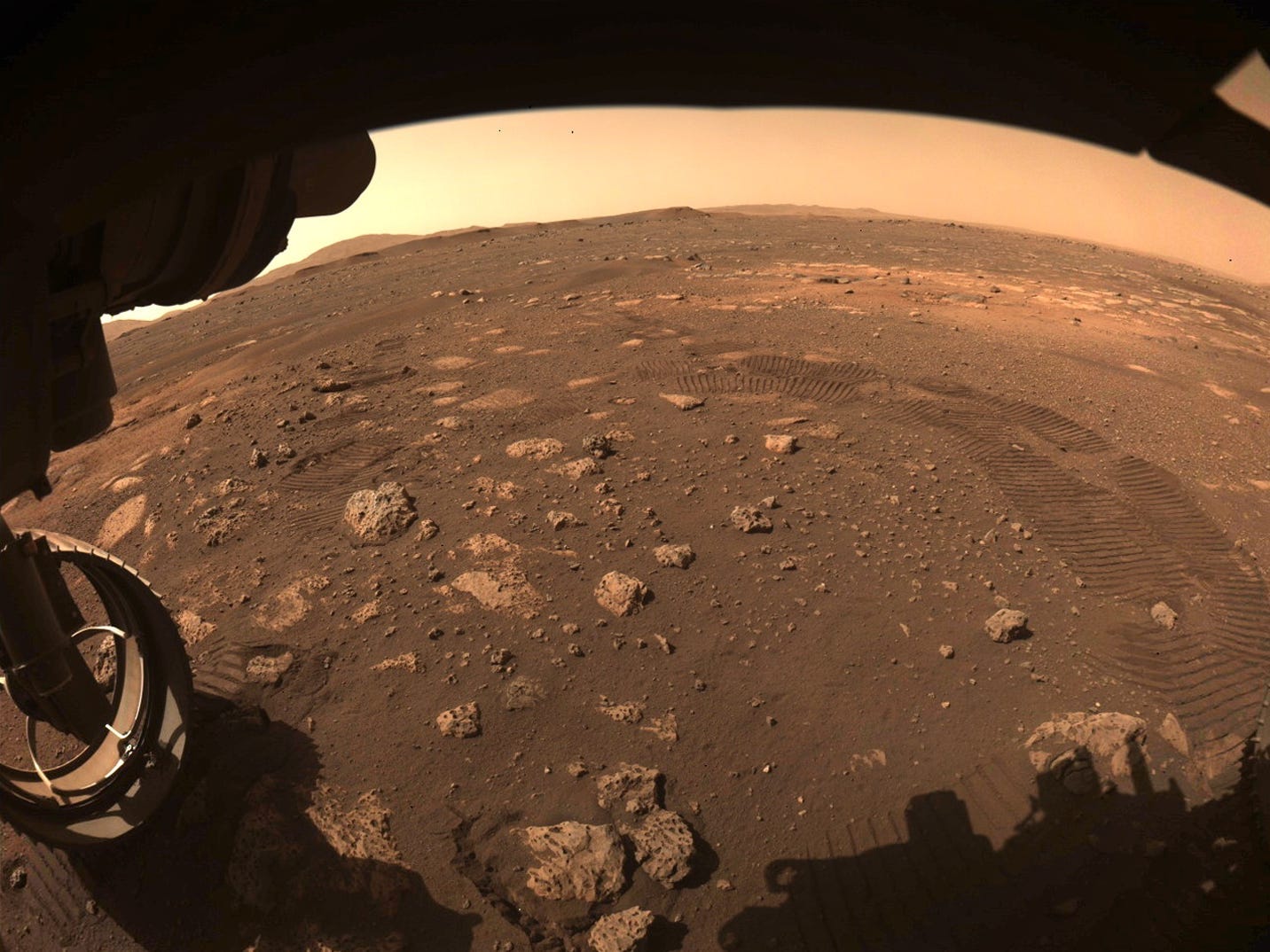 The team has another, longer drive planned  for the rover late on Friday, and is hoping for yet another on Saturday.

“So many people I can’t even count have worked towards this very moment for years,” Zarifian said. “It’s just amazing to see. I don’t think the team could’ve been happier.”

Life in the fast lane

Perseverance spent seven months flying through space to reach Mars. Since its landing, it has been adjusting to Mars life, getting its space legs, and preparing for its mission: to spend at least two years scouring an ancient Martian lake bed for signs of fossilized alien microbes. Perseverance is equipped to trek across Martian cliffs and dunes, and to collect up to 43 samples of Martian rock and dirt for a future mission to bring back to Earth.

The rover is better prepared for the rugged Martian terrain than any vehicle before it. Because of the Jezero Crater’s watery past, the area is rich with scientific potential, but NASA didn’t have the technology to explore it until now. Perseverance will have to navigate boulder fields, sand dunes, and cliffs hundreds of feet tall. It may even climb the crater rim in a few years.

It can do this thanks to its six titanium wheels, which each have their own motor. The wheels are narrower and their metal is thicker than on previous rovers, and each is lined with 48 cleats. That makes the wheels more resistant to the sharp rocks that tore holes in the wheels of Perseverance’s predecessor, Curiosity.

The rover can’t rotate those wheels while it’s driving, though — it has to stop whenever it needs to change direction. At its fastest, the rover moves at 0.1 miles per hour.

Still, in terms of miles it can cover per day, Perseverance drives about five times faster than Curiosity. That’s because the rover’s computers can process images and navigate while it drives. So it doesn’t have to pause for calculations every time it sees a new obstacle.

“‘Perseverance can walk and chew gum at the same time,’ is the phrase we like to use,” Zarifian said. “Which means more time to do science.”

Perseverance is at a crossroads

NASA’s Perseverance engineers and scientists are already planning routes for the rover to travel in order to reach the the river delta that once fed Lake Jezero.

They’ve picked two potential paths. The counterclockwise route, going north, has easier terrain, but the southern route would take Perseverance past some mineral deposits left over from the river delta.

“We’re working with engineers now to determine which path is most efficient and safest and most scientifically interesting for the rover to explore,” Katie Stack Morgan, the mission’s deputy project scientist, said in the briefing. 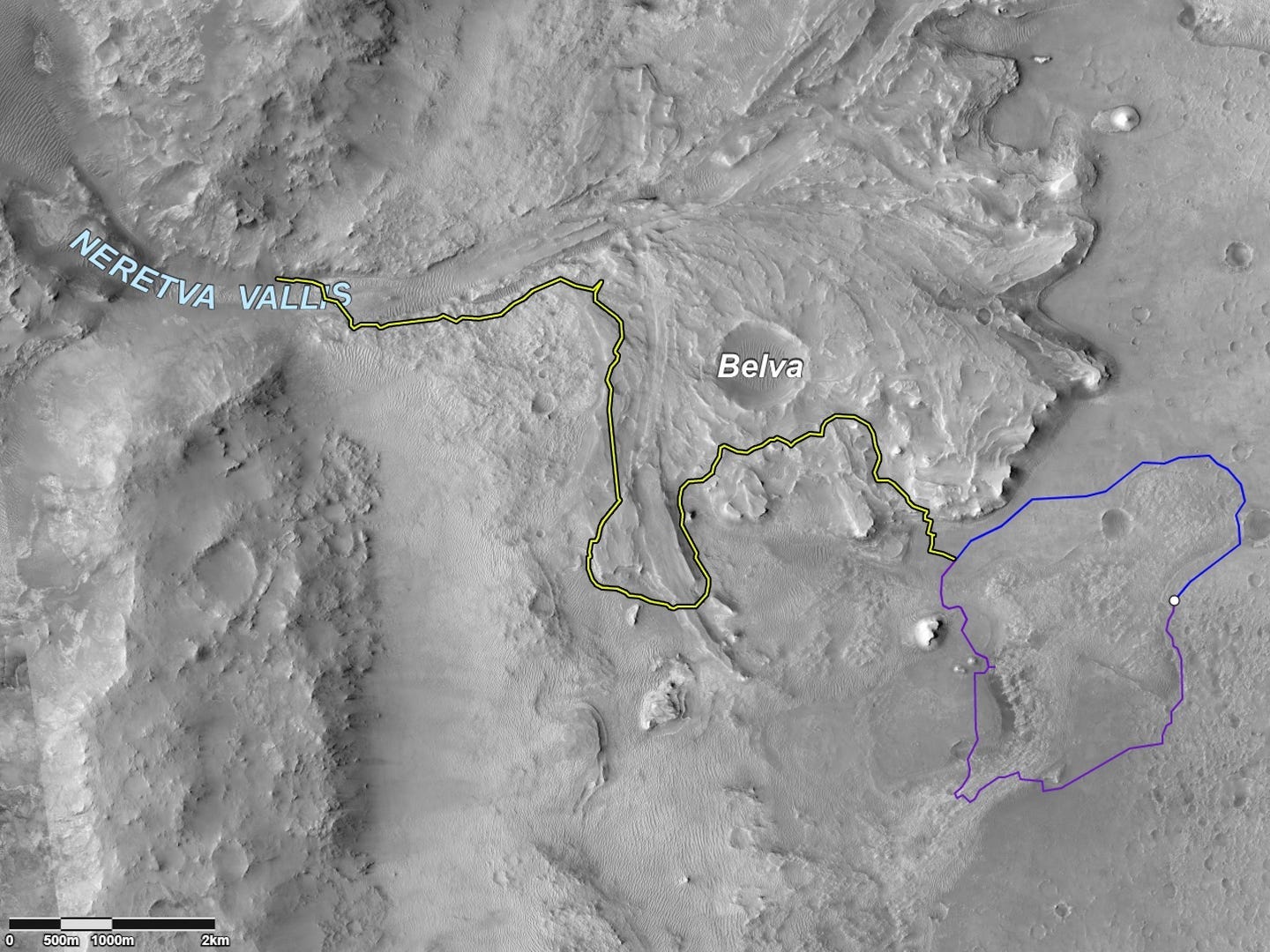 Both paths would end below the delta’s 200-foot-tall cliffs. From there, the team aims to climb the rover up to the ancient river’s mouth.

But before Perseverance starts on either path, it has a major task to complete. In the spring, the rover is scheduled to drop the first-ever interplanetary helicopter out of its belly — a four-pound drone called Ingenuity. The small rotocraft will then attempt up to five test flights while Perseverance’s cameras look on.

Then the rover will turn its lenses toward the cliffs, put those wheels to work, and begin its hunt for signs of alien life.

NOW WATCH: 12 epic sites to visit if you were a tourist on Mars, where canyons are deeper than the Grand Canyon

Businessbusiness insider
Previous How to watch Oprah’s interview with Prince Harry and Meghan Markle this Sunday on CBS
Next : Coursera files to go public ‘as soon as practicable’